Home Products Solar Caps – A Cozy Sweater for your Veggies! 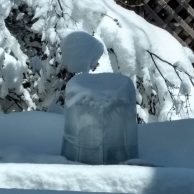 Just as we need to add another layer of clothing during these cold snaps, our warm-season veggie starts also need additional insulation as the spring season and soil slowly begin to warm up.  This layering can come in several forms, each with their own advantages and applications: low-tech overturned plant pots, row cover anchored over metal frame (as illustrated in the “Hardening-Off” portion of this article), and Solar Caps.

Due to their versatility and re-usability, Solar Caps have been one of our favorite garden tools for over a decade.

A Solar Cap consists of a sturdy, reusable metal frame that is anchored in the soil surrounding your warm-season veggie start (such as tomatoes, squash, peppers, etc.) and a water-filled bag that drapes over the outside of the frame. As the sun warms the water, heat radiates out to warm the soil, providing a terrarium-like environment for the veggie start to take root and begin thriving.  Eve demonstrates the step-by-step process to putting together your Solar Cap. Solar Caps can also be left in place around tomatoes throughout the growing season to provide protection from temperature fluctuations on summer and autumn nights, thereby extending your growing season.

Due to the cold temperatures, we have temporarily suspended our warm-season veggie deliveries but will let you know as soon as they resume.  The good news is that tomorrow we are expecting delivery of our Solar Caps, which you can stock up on, allowing you to utilize your Solar Caps as soon as the sun emerges to begin warming your veggie bed soil! 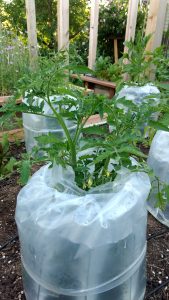 Harlequin’s Gardens is open for the 2021 season, ending in October.