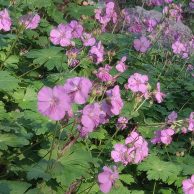 Hardy Geraniums are some of the most versatile an adaptable perennials for our area! Available in many colors and habits, they can be useful in sun and shade, moist and dry, as individual specimens, companion plants and ground covers.

These are not to be confused with Pelargoniums, the popular house plant, container and bedding plant Zonal “Geraniums” and Ivy “Geraniums,” which are not cold-hardy outdoors in Colorado. The name “geranium” is derived from a Greek word meaning little crane, hence the common name “cranesbill” which refers to the appearance of the seed heads.

Most of the species of geraniums are native to the northern and mountain regions of Eurasia and North and South America although some are found in South Africa, India, Indonesia etc. Most grow in grasslands, meadows, roadsides, and open woodlands. Therefore, the natural habitat for most hardy geraniums seems to be sunny and moist or part-shade and moist or dry. Most geraniums are tolerant of clay or light soils, but many appreciate organic matter, and some from alpine areas, e.g. Geranium cinereum, like loose soils. Although generally tolerant of pH variations, the more alkaline tolerant are said to be G. pratense and G. sanguineum, and our Colorado native varieties – G. viscosissimum (Sticky Geranium), G. caespitosum (Pineywoods or Fremont’s Geranium) and perhaps G. richardsonii (Richardson’s Geranium). Some species are impressively adapted to drought, notably G. sanguineum, caespitosum, viscosissimum, dalmaticum, and the cantabrigiense hybrid selections.

The flowers are five-petalled, usually in pinks, purples and ‘blues’ or white; many having contrasting veins, occasionally with a striking dark eye. The leaves also are attractive, some with rich red fall color and some with very pleasing woodsy fragrance when rubbed.