It’s time to buy your ‘seed’ garlic, which you should store in a cool, dry, well-ventilated place until planting time, from mid-October to mid-November. Seed garlic bulbs are specifically chosen for planting because they are the healthiest bulbs with the largest cloves, and they are intact. By planting the largest cloves, you’ll be rewarded with a harvest of big, juicy bulbs.

Garlic has been cultivated since very ancient times. The varieties that developed in different areas express the terroir of their locale, greatly influencing the local cuisines.

We offer varieties in the two major categories, soft-neck and hard-neck. Soft-neck garlic grows a ring of large cloves around the perimeter of the bulb, plus another one or two rings of smaller cloves in the center. Most soft-neck varieties make large bulbs which, when properly cured and stored, can be stored for many months. Their flavors and spiciness are varied, and soft-neck garlic rarely sends up a stiff central stalk, so it can be made into beautiful garlic braids.  Hard-neck varieties grow with a strong central stalk, around which is a single ring of cloves, usually quite large and fat. They possess a wide range of flavor nuances and degrees of heat. The central stalk makes a charmingly curled or twisted, edible ‘scape’ in mid-late spring.

All around the temperate northern hemisphere, garlic has now been harvested and cured, ready for storing, eating and planting!! Garlic is cold-hardy, most being well-adapted in USDA zones ranging from 3 to 8. If the soil doesn’t freeze, the roots will continue to grow right through the winter. The tops will grow whenever the temperature is above 40 degrees F. Garlic can sometimes be frost tolerant.  It thrives best in soil that’s teaming with microorganisms, enriched with organic amendments and fertilizers. Keeping garlic weeded and watered pays off.

This year’s offerings will include: 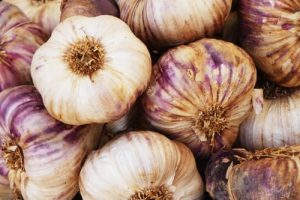