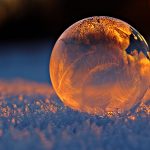 This year the Winter Solstice will fall on Monday, Dec. 21st

This astronomical event is the time when the Earth’s north pole is tilted farthest from the sun, so that here in the northern hemisphere, night is the longest and daylight is the shortest. This day has long been celebrated because it signals the reversal of the trend, with days lengthening until Summer Solstice. So even though there is a lot of winter left, there will be more day light. It is the promise of rebirth, of Spring to come.

Peoples through different times and cultures have seen this event as a moment of rebirth and hope. Many traditions have celebrated the Winter Solstice with evergreen trees, a symbol of ever-lasting Life. One of the few rituals we modern people still practice is bringing an evergreen tree into the house and decorating the Christmas tree.

Being the darkest day of the year, the Winter Solstice can be sad and depressing. And it is quite possible that the ritual of gift-giving is practiced at this time as a healing. Both the generosity in the giving and the gratitude in the receiving are antidotes to depression. Let us celebrate the promise of returning light and returning Life.

Saturn, Image made available by NASA in 2008 as photographed from the Cassini spacecraft.

This year’s Winter Solstice is highlighted by another astronomical event on that day: the conjunction of the two planets Jupiter and Saturn. This event was last visible 800 years ago, so don’t miss it! Go outside shortly after sunset and look at the southwestern sky. Jupiter will be brighter on the lower right and Saturn will be fainter in the upper left. Practice looking a few days before the 21st, and each day as they come closer to see (in the words of NASA scientist Patrick Wiggins) “the Solar System in motion.” Coming very close astronomically means visually; actually, they will be 400 million miles apart!

And the significance of this “Great Conjunction”? BYU professor of astronomy Denise Stephens said, “I’m going to choose to see it as a sign of better things to come.” Astrologically, it is a relationship of success because it combines both the expansive and the practical, honoring the future and the past, hopeful and realistic, eager yet serious, assertive, and deliberate.