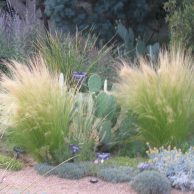 We often recognize grasses for their ornamental attributes – dynamic, flowing movement in the breeze, reflecting the dancing light, screening of unsightly areas, as well as their value in providing food and habitat for wildlife.  But the grasses are the plant family with the greatest economic value, and it’s interesting to think about grass-based agriculture, the oils derived from grasses, their role in making beverages such as sake, wine, beer, and whiskey, their importance in construction (think thatch roofs, basketry, furniture, fencing, bamboo framing, scaffolding), and of their use in reed instruments.

Harlequin’s Gardens carries many clump-forming grasses that are well suited for the residential or public landscapes, and some of our in-stock favorites are shared below (and we have many more in stock too!). But first, a refresher on three main types of grasses: cool season, warm season, and evergreen.

COOL SEASON:  Already up and green by March, cool-season grasses make active growth in cool weather until it gets hot. They can be kept green through summer by watering, but otherwise they go dormant until the fall, when some of them may begin growing again. Most bloom in June, but a few wait until late summer. Because they begin growing so early in the year, they are subject to being demolished by rabbits. People with resident rabbit populations should choose Warm Season grasses instead. Cut grasses back to 2-3” inches tall in February, before they start their active growth, so light can penetrate the entire clump.

WARM SEASON:  Most grasses grown in this area are warm-season grasses. Many of our native grasses, and many of the most popular grasses for our area are Warm Season grasses. Wait until late March or early April to cut back warm season grasses. Cut as low as you can, ideally 2-3”, so light can penetrate into the entire clump.

EVERGREEN:  Remain mostly green through the year and do not need to be cut back. To clean them up in spring, gently ‘comb’ out old dry blades with a hand rake.

Following are some of our favorite ornamental grasses that are in stock and available for your gardens. 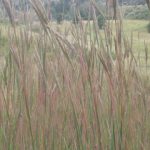 Native! Big Bluestem is taller and has a wider blade than Little Bluestem and is somewhat upright but also arching. It also has attractive reddish and purple fall colors. Big Bluestem is one of the dominant components of the Tallgrass Prairies across the Great Plains, where it can reach 8’ in height. Here it can range from 2 to 5’ tall, depending on water and nutrients available. In late summer, Big Bluestem’s purplish red flowers appear in groups of three or six, which look like a turkey foot – hence the nickname: “Turkey Foot Grass”. The root system can extend down more than 10 feet. Each year, a third of these roots die, feeding soil microorganisms and opening up channels for water. This plant is drought tolerant once it’s established. Attracts birds and butterfly larvae. Plant in Full Sun. Hardy to Zone 4.

‘Blonde Ambition’ was discovered in 2007 by David Salman of Santa Fe Greenhouses, who noticed an outstanding specimen growing within a stand of robust Hachita blue grama. At 28-32” it was taller and wider than the standard, its leaves were a bright blue-green and it was topped with a multitude of its distinctive flag-like flowers, although these were chartreuse rather than the usual black or brown and they were held appealingly at a 90 degree angle to the leaves. It was apparent this was a plant that could stand on its own as an ornamental.

This exceptional plant was found to have chartreuse flowers that turned blonde as the season progressed and the rigid stems popped back up after snowstorms, rather than remaining prostrate, so its season of attractiveness lasted well into the winter. Grow ‘Blonde Ambition’ in clay, loam, or sandy soils, with full sun and moderate to very low H2O. Hardy to Zone 4, 8,000’ elevation. (Photo Credit: Plant Select) 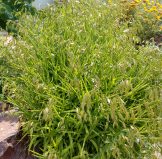 A US native, though not native here, this grass grows well in part shade. The wide, bright green blades emerge from the stems at many heights, giving it a slightly bamboo-like look. The pendulous seed clusters in late summer are composed of very attractive flat, plaited spikelets, starting out pale green, later turning tan. Foliage stays green until fall, when it turns yellow. It will self-sow but is not difficult to control. Hardy to Zone 3.

Native!  Switchgrass was an important component of the Tallgrass Prairie. It tolerates a wide range of soils, including dry ones, but prefers moist soils that are not too rich in nitrogen, and grows best in full sun. Here it grows to about 3’ tall and wide, topped in midsummer by finely-textured pinkish flower panicles that hover over the foliage like an airy cloud. Seed plumes turn beige and persist well into winter, providing an excellent seed source for songbirds. Fall foliage color is yellow, but selections like ‘Shenandoah’ develop beautiful deep red and purple foliage color in late summer. Salt-tolerant. Hardy to Zone 2.

Native! Little Bluestem is very erect to 24”-30” with fine foliage and blooms in late summer-early fall. Blooms turn white and catch the early morning and late afternoon sun beautifully when back-lit. The foliage turns copper and looks good for a long time. Very drought-tolerant. Selections ‘The Blues’ and ‘Prairie Blues’ have very blue foliage during the growing season. ‘Blaze’ is a colorful selection of the common native in this region. Hardy to Zone 3.

Native! The ‘little brother’ of Giant Sacaton. The foliage mass is about 2’x2’, with the large, pinkish airy bloom/seed plumes rising to 40-48″ tall. For a ‘warm-season’ grass, Alkali Sacaton gets growing quite early in spring, so prune it back in February.  A robust native, Alkali Sacaton flowers for many months, beginning in June. Deep rooted, this grass grows well in all soil types including sand, loam and clay as well as alkaline and salty soils, and prefers moderate to low moisture.  On the prairie Sporobolus is used by animals for forage, cover and nesting. Its seeds are relished by birds. Hardy to Zone 4.

Native!  Comes up earlier in spring than most other warm season grasses. It also flowers earlier than most other warm-season grasses. This huge S.W. native grass grows to 6-10’ tall and 4-6’ wide, tolerates most soils and is very drought-tolerant. Huge airy flower/seed panicles are ornamental well into winter. Hardy to Zone 5. Cut back to 2-3” in late winter. (Photo credit: Plant Select)

Native! A lovely small grass found here in the foothills and eastward across the Western prairies. Growing to 1-2’ tall and wide, it makes an elegant, fine-textured, emerald green fountain, suitable in many garden styles. The fine-textured plumes that rise above the foliage clump are attractive in bloom and in seed, and are favored by songbirds. The inflorescences are pleasantly fragrant – some say they smell like burnt buttered popcorn. Plains Indian tribes ground the seeds to make a tasty flour. Prairie Dropseed is also drought tolerant and turns a nice russet brown in fall. Hardy to Zone 4. 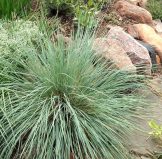 A much sought-after modest-sized evergreen grass with powder-blue blades, and that has some shade tolerance. It forms an open, symmetrical mound of foliage from 12” to 24” high, and a bit wider, looking like the ‘big brother’ of Blue Fescue. Bloom stalks add another 12 to 18”, and provide interest for several months. Hardy to Zone 4. 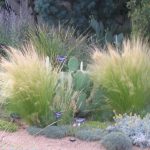 Also known as Ponytail Grass, this small grass, to 14” tall, has very fine-textured blades that make a ‘fountain’ of green. It can sometimes be evergreen. This grass may not be very long-lived, but will replace itself with seedlings, which can be relocated when small. Hardy to Zone 5. 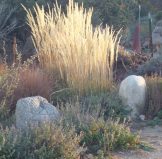 The most popular and over-used ornamental grass, for good reason. Medium sized (to 4’ tall), very erect form, easy to grow and highly adaptable to everything but shade, very durable flower/seed heads remain attractive all summer, fall and winter. No fall foliage color. Cut down in early February. Try to avoid plantings that look like rows of soldiers standing at attention! Hardy to Zone 4. 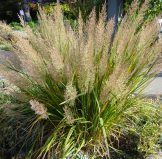 To 3’ or 4’ tall, with a graceful fountain-like or mounded shape, and waits until the end of the summer to flower. Can take some shade. Very pretty, with pinkish plumes that dry tan. No fall color. Plant Select. Should be used more. Hardy to Zone 4. 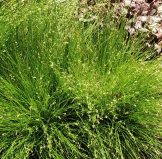 Vanilla Sweet Grass is an aromatic, cool-season perennial growing 10-24” tall, blooming in June to July, and spreading about 2 feet per year by underground rhizomes. The natural range of Sweet Grass is Greenland to Alaska, south to New Jersey, the Midwest, and Arizona, in zones 3 to 7. Its natural habitat is wetlands, prairies, and savannas in wet to medium moisture soils. A sacred grass in Native American ceremonies, Sweet Grass is braided and burned as a ‘smudge’ to purify body and soul and invite the presence of good spirits. The glossy green leaves have a pleasant vanilla fragrance. Because of its aggressive, rhizomatous nature it can be difficult to eliminate if it has spread to areas where it is not wanted. Though Sweet Grass prefers rich, moist soils, it will grow in almost any soil that receives a minimum of a half day of sun. Sandy, well-drained sites will require mulch and watering during times of low rainfall. Add compost to sand or clay soils. The preferred pH range is 6 to 8. 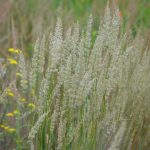