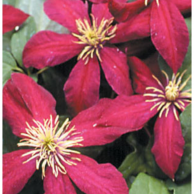 Despite the access we have right now to our snow-free gardens, in general it’s not time to begin garden clean up. Undoubtedly (hopefully!) we will receive more snowfall in February and March and it is beneficial to keep leaves on the ground and last-year’s stalks on our perennials because this cover provides habitat for overwintering beneficial insects and it helps to keep the plant roots and crowns warmer.

In late February and early March it will be time to cut back certain Clematis vines, depending on their category. Here is an in-depth guide to the three Clematis Pruning Groups.

Stay Tuned!  Next week we will focus on approaching cutting back ornamental grasses. 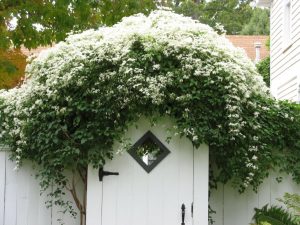 Clematis are often called the ’Queen of Vines’, and for good reason. Native Clematis species are found from coast to coast in the US, some are from Europe, and many more are from China. Their bloom times range from early May through September. Flowers range from small individual bells or small star-shaped flowers in large clusters, to bold 8”-wide flat ‘dinner plate’ blooms. The large-flowered climbing species have been extensively hybridized to create spectacularly showy blooms in great profusion.

Depending on their heritage and their bloom time, Clematis varieties respond to three different pruning strategies. It helps to keep a record of the variety names of your plantings so you can identify which pruning strategy to use, and how to use each variety. Note that Clematis vines use a unique method to attach themselves to supports: the leaf-stems seek out twigs, wires, cords, and other slender supports to grasp and wrap themselves around. They can grow up trellises with slender upright elements, into trees, over and through shrubs and roses.

Recommended for Clematis species and cultivars which flower on old, ripened wood that was produced the previous year, and bloom in early to mid-spring. This includes C. alpina, C. macropetala, C. pseaudoalpina, C. patens and their cultivars.

These usually do not require any major pruning; however, if the plants have become too large or untidy, a little cutting back can be done just after flowering has ended. Pruning live wood early or late in the season will result in loss of flowers. 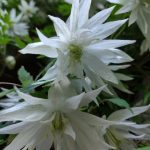 In past years we have offered species and cultivars in Pruning Group #1 which are not currently available:

Recommended for Clematis that produce two flushes of bloom, the first before early summer (on the previous year’s wood), and the second display in late summer, on new (the current year’s) growth.

Remove all dead and weak stems in late spring, immediately after the early bloom has ended.  Also do selective pruning of the flowering shoots as necessary at that time, working from the top of the plant down, to encourage good re-blooming in late summer. All PG2 varieties can, if necessary, be pruned as PG3, but early bloom will be sacrificed.  Vines will be somewhat shorter, but they will still bloom profusely in late summer. 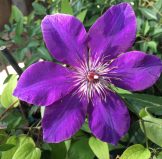 The cultivars offered this year at Harlequin’s Gardens in Pruning Group #2 (PG2) include:

In past years we have offered species and cultivars in Pruning Group #2 which are not currently available:

Recommended for Clematis that flower on the current year’s new growth in early, mid or late summer.  Besides climbing varieties such as cultivars of C. viticella and C. texensis, the herbaceous Clematis varieties and the ‘scramblers’ are also in this group.

These varieties need hard annual pruning in late February or early March.  Prune all stems to just above the first (lowest) pair of healthy, live buds, and discard all the old growth above the cuts.  This encourages the plant to produce strong new shoots and bloom profusely.

The cultivars offered at Harlequin’s Gardens in Clematis Pruning Group #3 (PG3) include:

In past years we have offered species and cultivars in Pruning Group #3 which are not currently available: