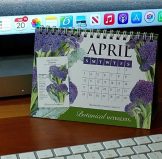 The award-winning design of Botanical Interests’ desk calendar is botanically inspired, with beautiful illustrations, by LOCAL artists, of their newly introduced varieties. Consider it a little window into your garden with space for keeping garden notes on the back of the tent.

This is one of their most requested items, as they are handy as well as beautiful, and make excellent gifts!

Piece together a fascinating visual exploration of the natural world. Featuring illustrations from Julia Rothman’s best-selling book Nature Anatomy, this jigsaw puzzle will open your eyes to new ways of seeing earth and sky, flora and fauna. With each of the 500 pieces you put in place, nature’s wonders unfold: the crystalline structure of a single snowflake, the different types of feathers on a bird, a constellation of stars. A distinctive blend of art and science, this sweeping study of the universe will delight, educate, and enlighten. 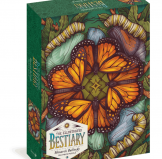 Enlightening, illuminating and visually extravagant, Maia Toll’s Wild Wisdom series sheds light on the magic and mystery that abounds in the natural world — animal, vegetable and mineral, and features the opulent art of Kate O’Hara. We are offering two of the stunning 750-piece puzzles from O’Hara’s fabulous illustrations. 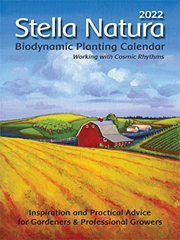 The Stella Natura Wall Calendar is an easy-to-use, informative and beautiful planting and gardening calendar that shows the best times to take advantage of the cosmic influences of the moon, sun and planets.  This is a research-based system that is used by Biodynamic farmers and gardeners.

We have been using this calendar for over 25 years and believe it has helped with germination of seeds, root development of cuttings, and healthy plant development.  More than just a calendar – it’s packed with valuable information and insights for successful growing, from seed to harvest!

Now celebrating its 35th year, The Boulder Irish Session is a Boulder ‘institution’ and is still going strong. They are an informal, dynamic gathering of top-notch Front Range musicians who, until Covid, came together on Sunday evenings at License No. 1 in the Boulderado Hotel to share tunes and songs of the Celtic tradition. After the last 2 summers of outdoor sessions on Sunday evenings at Harlequin’s Gardens, beginning Sunday Oct. 3rd, BIS is trying out a new indoor venue. We’ll update you soon!

Over the years, the Session has gained many loyal followers who know they will always hear some of the best, most spirited live traditional Irish and Celtic music in the region on any given Sunday. Harlequin’s Gardens co-owner Eve Brawner is one of the founding members of the Boulder Irish Session and is still a ‘regular’ there, playing English concertina, and singing. We offer both of their excellent CDs, Sunday at Conor’s and the sequel, Next Sunday at Conor’s. 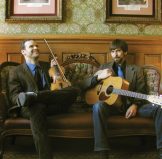 Jonathan Sousa (guitar/banjo) and Adam Agee (fiddle), both members of local Celtic band Take Down the Door, are Colorado’s rising stars in the Celtic music world, with two duet albums plus several other CDs Jon has made.

They have toured extensively in Europe, the UK and North America to enthusiastic reviews. Ceol na gCarad is their latest duo CD, preceded by their Suantrai album. Twilight is Jon Sousa’s solo album, featuring many of his original compositions, and Canyon Sunrise is a duet recording with fabulous fiddler, Andy Reiner. In addition, we offer Take Down the Door in which Jon combines his talents with Adam Agee, Jessie Burns, Eric Thorin, and Beth Gadbaw.

Last year, my good friends and music compatriots, Los Boyos’s (Mason Brown, Richard Gee, and Sky Kelsey) released a debut album!  These local boyos are all spectacular musicians, and their arrangements together are sublime!  The album features a rich tapestry of traditional Celtic songs and tunes weaving multiple strings and voices to create an aural equivalent of Celtic knotwork. 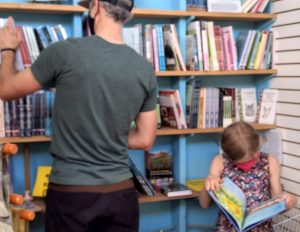 We know it’s not necessarily easy to access the ‘Holiday Spirit’ this early in the season, especially in the midst of local wildfires and a pandemic. These emergencies have separated us from each other, but in meaningful ways, they have also brought us together. Here at Harlequin’s Gardens and beyond, we have seen a real increase in mindfulness and caring for others. END_OF_DOCUMENT_TOKEN_TO_BE_REPLACED

Harlequin’s Gardens is CLOSED for the season.