In this article, Mikl explains why Soil Health matters.

From Peak Soil to Soil Revolution

We are having a real revolution in our relationship with our soils. The turning point is our change in focus from soil fertility to soil health. In the last 60 years of the “Green Revolution” (i.e. the petrochemical boom), soil was viewed as a physical structure and fertility was viewed as a measure of chemicals in the soil — primarily NPK, nitrogen, phosphorus and potassium. The petroleum industry could make these macronutrients from natural gas, which make plants grow but often in poor health. Weak plants attract insect pests and fungal diseases, so more petroleum in the forms of insecticides and fungicides added to the success of the oil industry. But this approach has led to “Peak Soil” where land is losing productivity, crops are losing nutritional value, the soil is eroding at extreme rates, and the health of animals and people has declined.

At the same time that the failures of the petrochemical-industrial approach to agriculture and gardening are becoming clear, there has been a tremendous increase in the study of microbiology. And increasingly we are seeing the successes of farmers and gardeners who have been investing in soil health. All this is leading to a Soil Revolution which is coming from the insight that soil is not just physical and chemical, but very importantly, biological.

This revolution is revealing itself through scientific research, the December Soil Revolution Conference, the Ecology of Soil Health Summit coming in June, and Denver’s Soil Health Awareness Campaign. Colorado State University is actively engaging in the soil health direction. CSU professor Mathew Wallenstein (pictured right, from his CSU homepage) and his research group are “bioprospecting for groups of microbes (microbiomes) that are especially efficient at forming new soil and recycling nutrients.”  And the USDA Natural Resources Conservation Service is distributing information showing how the Soil Food Web cycles nutrients from wastes and how microorganisms increase soil fertility and porosity. And Carbon Farming is a new buzz offering real potential to reverse global climate change.

Gardeners are talking with each other about soil microorganisms, and their successes with compost tea and mycorrhizae which increase soil life. They are saying, “By the way, we have to stop using RoundUp, fungicides and pesticides, because these poisons are killing our allies, the beneficial microorganisms.”

The new formula for soil health has four or five aspects.

Minimize soil disturbance like plowing, tilling, overgrazing and over application of nutrients and pesticides. When soil is turned, the fungal networks are broken and the carbon is exposed to oxygen which is then oxidized and returned to the atmosphere as carbon dioxide. Research shows that in the last century, we have burned up 90% of the organic matter in our soils. And it is now recognized that carbon is the “key driver of the nutrient-microbial recycling system.”

Keep the soil covered with mulch, plants or cover crops.  Mulch can be shredded leaves and wood chips, or any plant residue without seeds. Cover reduces wind and water erosion, reduces evaporation, moderates the soil temperature, and provides habitat; all which make the soil life more successful. It also supplies a slow-release of nutrients.

This means that even in the off-season when we have turned our backs on our gardens, they need to be growing plants so that the plant roots can continue to feed the microbes and keep them alive. This is usually accomplished in veggie gardens through cover crops which also add nitrogen and organic matter to our soils when they are cut down. Evergreen perennials and shrubs also feed microbes in winter.

This element is more for farmers: Integrating livestock so animals can add their manures, rich in nitrogen and organic matter, plus other advantages I don’t understand yet.

This “revolutionary” system is based on Nature’s design for soil fertility which has evolved over millions of years, starting with bacteria and fungi, then plants, and a long time later, animals. In that time plants and the microorganisms in the soil have evolved a very clever and efficient way of enriching themselves. Plants can photosynthesize, so they take carbon from the air and soil, plus water, minerals and sunlight and the result is sugars/carbohydrates that are the food for the planet. Some 30%-40% of the sugars that plants make are given (leaked) through their roots to the mycorrhizae and other fungi and soil bacteria, and in return, these organisms bring water and other nutrients to the plants, or break down raw matter and minerals into forms that are soluble and usable by the plants. The better the plants do, the better the microbes do, the better the plants…. This is a symbiotic system that we humans could learn from. The abundance in Nature comes from everybody producing more than they need, making partnerships, and not wasting anything.

So, is it no longer necessary to add fertilizers? Supposedly in a “well balanced ecosystem, external inputs aren’t necessary.” But who has a perfect soil? And what happens when we grow foods that take nutrients from the soil to make their seeds, fruits and leaves? So yes, depending on what we grow, some inputs are important for production. So, what do we need to add? Here is where my brain locks up because soils are so complex, and everyone’s soils are different and what we grow is different, that there really are no simple formulas. 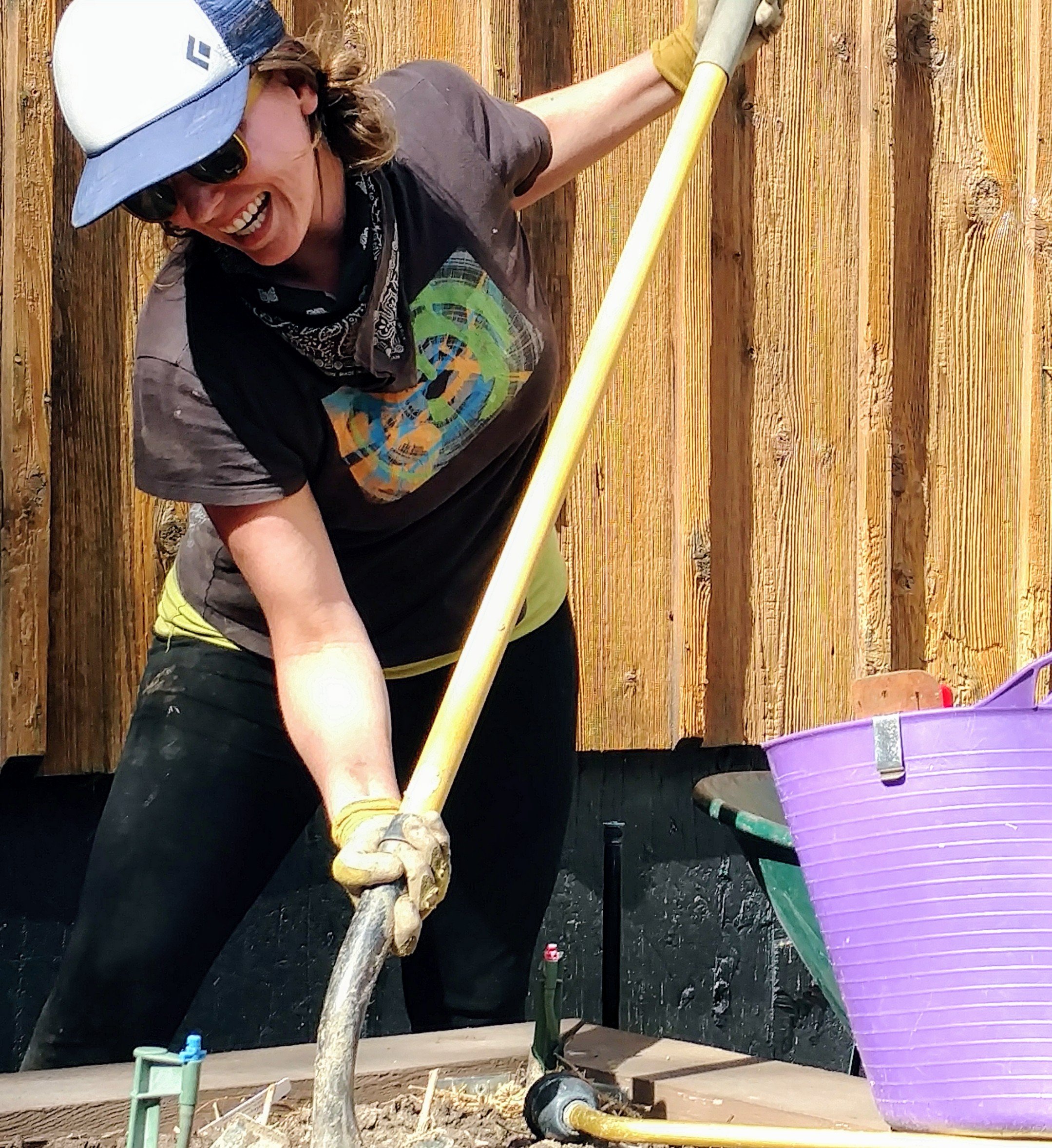 Here is a rough guide: Organic fertilizers are generally safer, longer lasting and better for microorganisms. Oxygen is essential for fertility because the beneficial microbes are aerobic, meaning they thrive on oxygen. Adding organic matter, expanded shale and turning the soil add oxygen. But the activity of worms and other soil life and their remains when they die, make soil aggregates which are looser and hold more air. Organic matter like compost is good, because carbon is an essential element and compost contains many other nutrients for microbes and plants. Water is not a nutrient but is essential for both photosynthesis and for soil life. So even xeriscapes need some water.

If you are growing natives and steppe plants, you can get by without amendments or with just a little compost and rock dust. If you are growing food, you need more nutrients and more water. Cover crops use the soil to nourish itself. Legumes like beans, peas and vetch are very good at supplying nitrogen and organic matter.  We all need to learn more about using cover crops. Calcium can be a limiting nutrient, often tied up in our alkaline soils. I am wary of using lime and gypsum in Colorado because of our high pH. Plant-available calcium can be supplied by land based coral calcium and worm castings. Phosphorus is essential and is supposedly in great abundance in our soils though in an unavailable form. Building a healthy soil life will help make phosphorus available. Bone meal and soft rock phosphate are organic sources. 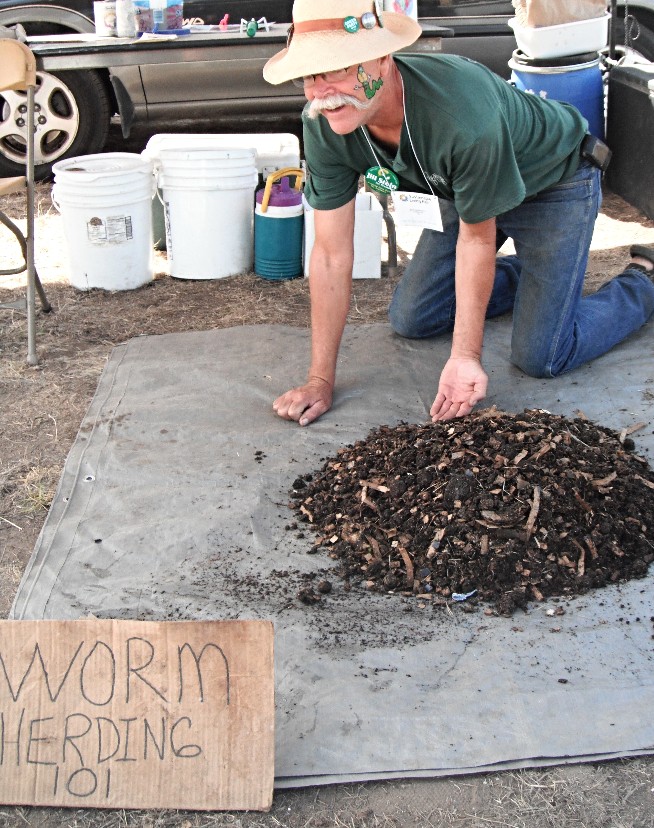 Worm castings are a great source of plant-available nutrients.  (Pictured right is “Worm man” John Anderson herding worms for vermicomposting.)  Rock Dust and Kelp (seaweed) are great sources of micronutrients, so essential for plant health. Humate is a mined carbon concentrate that benefits microbes and their abilities to make nutrients in the soil plant-available. And Expanded Shale is a great clay buster, which is shale that is mined south of Boulder and fired to create a rock-like granular material that holds both air and water. It does not break down and supports microorganisms and good soil structure.

What about soil tests? I don’t know. Some people swear by them, some people swear at them, and a mineral’s presence in the soil does not mean it is available to the plants.

t an experiential level, at our nursery we use organic fertilizers made from fish and seaweed and animal manure, as well as alfalfa, rock dust and humate. We use granular formulas for longer lasting effect and liquid fertilizers for foliar and faster acting effects. For young veggie plants, we use our compost tea mixed with a liquid fertilizer. But we like to err on the side of under fertilizing rather than over fertilizing. Several years ago we started using mycorrhizae, a beneficial fungi innoculation, whenever we plant, because that has proved to be very beneficial in getting plants established, especially in drier conditions. And we mix mycorrhizae into the potting mixes we use.

So like all revolutions, the current Soil Revolution is dramatic, full of promise and needing much more research, trial and general application. However, focusing on soil health rather than pumping plants with petrochemicals has got to be the right direction for the plants, for their microbial allies, for our health and for the planet.