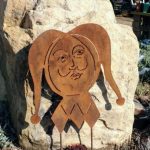 In October of 2018, we were asked by the Rocky Mt. Chapter of the Rock Garden Society to give a program that would include a history of Harlequin’s Gardens. Mikl has been a member of that excellent organization since the mid-1980s and so he composed and presented this playful and humorous account of the evolution of our nursery. We think you will enjoy it!

A Not-so-BRIEF HISTORY OF HARLEQUIN’S GARDENS 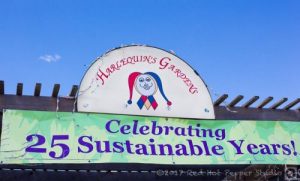 Harlequin’s Gardens has just completed our 26th year in business. It’s practically a miracle. We were able to get our start and have survived this long because of some remarkable circumstances, some remarkable people, a genuine vision, strong determination, and just plain luck.

In the beginning, my ignorance kept me from knowing the depth of the hole I was digging myself into. I had no idea of how complex and all-consuming the nursery business can be. But it wasn’t all ignorance; I was smart too. Early on, I joined the Rock Garden Society, and later I married Eve Reshetnik. But I’m getting ahead of the story.

In 1985, I was a 40-year-old arborist, climbing trees with ropes and chainsaw, and beginning to think about what I would do next. I was looking for a place to park my old School Bus RV, and find a place with cheap rent for my new wife and her daughter … Funny how things work out: our marriage was a mistake, but we stuck with it for 14 years,  and I wound up with a nursery and Linda got an early retirement. 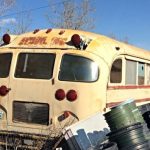 Anyway, a tip from a street person led me to a 2-acre lot on the prairie side of Boulder, with a dilapidated house and 7 junk cars. I parked the bus and checked the zoning … Yup, in the Agricultural Zone, and a use-by-right for a commercial nursery. I really liked the idea of running a nursery. Little did I know. I finally talked the owner into selling it to me. It was in such terrible condition, (and I think he liked me) that he sold it to me for the price of the land.

The lot was down a dead-end road, within ear-shot of the Rifle Range; electricity was the only service, and the well, like most in the neighborhood, was only a trickle. So, I bought a boat toilet for the house and started a xeriscape. Tony Avent, of Plant Delights Nursery, would not have thought this was a good idea. In his book So You Want to Start A Nursery, he stated: “Two important things you have to have for a successful nursery: a good supply of water and good visibility.” It’s a good thing I didn’t read the book until it was too late. Oh, yeah, and another thing, I had never actually worked at a nursery before; and even though I had studied Biology in college, and knew quite a bit about trees, I really didn’t know that much about plants.

You were so welcoming and generous with your knowledge, and I was so empty that I just soaked it up like a sponge. On top of that, you had the best plant sales, especially the fall sale where I found the coolest plants at the cheapest prices. And I planted them, and I planted lots of them, and once in a while I watered them.

And Panayoti Kelaidis, with his great enthusiasm, knowledge and two gardens to collect seeds from, was tremendously generous in getting Harlequin’s Gardens off the ground. And so many of you gave us seeds and the examples of your own gardens: Homer Hill, Dick Bartlett, Marcia Tatroe, Bob Nold, Lauren Springer-Ogden, Bill Adams, Rod Haenni, Rebecca Day-Skowron and more recently Mike Kingten and Kelly Grummons. I also got help from Scott Skogerboe, Betsy Baldwin, Ted Keutel, Dr. Campbell of Mile Hi Rosarium and many others. 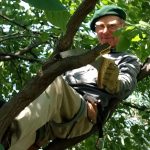 By 1990 I was getting ready to open Harlequin’s Market for two days a week (while I worked the other 5 climbing trees). But I needed a greenhouse. I wasn’t handicapped by any assumptions, since I didn’t have any experience. I spent a couple days driving around to see what growers were using for greenhouses. And I was Horrified! Ground to ground glazing, no insulation and 4″ diameter gas lines. Well, I had no idea what to build, but it wasn’t going to be like that.

So, I spent a year researching solar greenhouses and then built a little 12′ x 24′ super-efficient solar-geothermal greenhouse.  But I didn’t know how to propagate plants, so I hired one of the best propagators in Colorado, Dermod Downs, to give me a 2 day, hands-on, crash course in seed propagation. Then I joined the NARGS Seed Exchange. Panayoti not only generously shared seeds with me, but let me help him clean seeds, where I learned from a professional how to do it without machinery. And Olie Webb donated a set of brass cleaning screens. By this time, I was up to my ears in the nursery business.

After years of learning from good plant people, studying and growing all the xeric plants I could find or grow from seed, I still don’t know that much about plants … not near as much as my brilliant gardener wife, Eve, but that part is coming up.

But I did have a lot going for me that kept us afloat in those days. For one thing, climbing trees for a living had taught me how to stay on my toes, and keep my wits about me. For another, I had been in the Peace Corps in India for 2 ½ years, and I could live on practically nothing but good food, and not feel sorry for myself … Funny how doing what you love and believe in, is fundamentally fulfilling.

And besides that, my mortgage was ridiculously low, so I could use the income from my tree business to pay bills and invest in the nursery. Also, as fortune would have it, 3 Boulder nurseries went out of business and no new nursery has been started locally in the last 26 years except Home Depot.

And Boulder was surely the best location for a small, organic, local, natives and specialty plants nursery, with a country atmosphere. And our customers have been great: appreciating our eco-xeric mission, putting up with a porta-potty for 10 years and tolerating our funky-farm style. 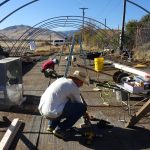 Starting a nursery from scratch requires a lot of money, a lot of debt, OR a lot of sweat equity and time. I took the third path.  My father was a builder and taught me how to fix and build things, and my mother taught me how to write and research. And I was born with the heart of an explorer and the tenacity of a snappin’ turtle.

But that wasn’t enough. Harlequin’s Market, as it was originally called, started in 1992 and I was counting on it becoming profitable in 5 years, but after 5 years, I still couldn’t afford to pay myself. The nursery was growing and getting to be too much to handle, and it was barely surviving economically. That’s when I met Eve Reshetnik. 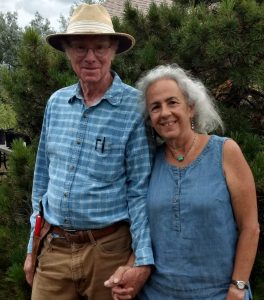 The answer is: “through the Rock Garden Society.”

Eve entered a couple of her botanical illustrations in a juried show at the 1993 Rock Garden Society Conference in Vail and won a free membership. Mikl saw the need for more advertising and sent the Harlequin’s Newsletter to all the new members of the Rocky Mt. Chapter, and when Eve came to the nursery, there was “chemistry” as they say.

Eve was a landscape architect who was dissatisfied with the business, but always had a fascination and focus with plants. She is also an artist and a musician, with an interest in practically everything. And at the time she was running her own picture framing studio.  After our marriage in 2000, we changed the name to Harlequin’s Gardens, expanded the retail infrastructure, she took an interest in the business and sales increased significantly.  Then Eve began taking a greater role in the nursery. With her vast knowledge of plants and her discriminating insight, she took over the ordering of perennials and put a focus on organic vegetable starts, which she researched and selected. And her home garden has become a test garden, and seed and cuttings source for the nursery.

All along we attracted a very knowledgeable and fun staff, dedicated to our principles. It is their diligence and sincerity that has been the day-to-day fulfillment of our vision. We have always been focused on helping our customers find the plants that will best succeed in their specific conditions. We have provided a wide selection of unusual perennials, organic veggie and herb starts, natives and hardy roses. In the last 10 years, we have also focused on fruit trees and berry bushes, soil products, beekeeping supplies and our classes. 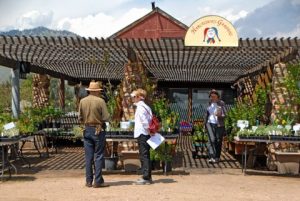 We have always managed the nursery organically. We have never used toxic pesticides, fungicides, herbicides, or chemical fertilizers. I spent 10 winters, when I couldn’t climb trees, researching alternatives to pesticides. Then in 2014, we learned the truth about neonicotinoids; how this systemic pesticide is safer for people but very toxic to all insects, including pollinators, even in small amounts. So, Eve and I made the decision not to buy ANY plants treated with neonicotinoids.

It’s more than interesting to be in business with your wife. Because, you know, we don’t always agree. But we do share the same main values and principles, and we agree on the mission of Harlequin’s Gardens. And I couldn’t ask for a better partner or dance partner. And the fact that we really love each other helps a lot.

But before I get all teary-eyed, I want to say how Brave Eve is.  She really stayed focused to get herself healed after being run over by a car; and very soon after, she fearlessly agreed that Harlequin’s Gardens had to make this big investment and leap, in order to offer our customers neonic-free plants.

We bought the trashed-out one-acre lot next to us to build a bigger production facility. This was a big financial leap, and to be able to afford to do this, we had to create a wholesale business that could pay for itself and provide pesticide-free plants to Harlequin’s Gardens. 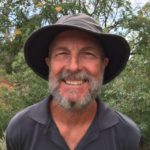 We found out that Country Lane Nursery was being sold, and would no longer be a propagation nursery, so I contacted their head propagator, Gary Meis, who we knew to be an excellent grower and capable of growing without toxic pesticides. It turned out that he did not want to use pesticides and was willing to try working with us.  This is our third year in this wholesale mode, and we are making excellent progress.

We have solved our water problem by having 3 cisterns where city water is delivered in trucks and applied precisely by hand.  It’s expensive, but we save a lot of money by not buying propane.  And not having good visibility means, a lot of people in Boulder still don’t know we exist, but for more than 20 years, trading articles for ads in the Colorado Gardener has been good marketing. And we have a force of enthusiastic customers who spread the word. And our community engagement helps.

In the last Saximontana, I said we are “prospering precipitously” because it always seems like we are on the edge. But it’s a good edge, and maybe even, a leading edge.

And that’s our story up to NOW (a year and a half ago)! 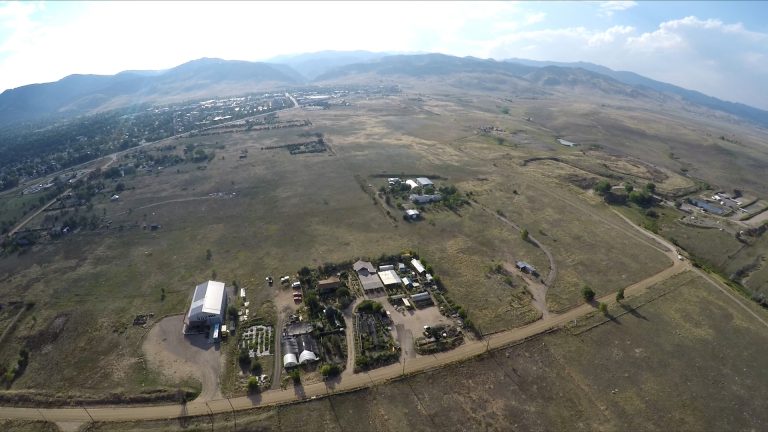 Open Every Day Except Mondays