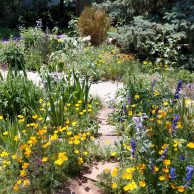 Since the drought of 2002, there has been some real progress in understanding and appreciating xeriscape or water-wise landscaping. And yet some people thought ‘the drought is over, and we can go back to assuming that we have as much water as we want’. But it is predicted that with climate change we will have more and longer periods of drought, and it would be painful to be as unprepared as we were in 2002. That was our wake-up call. Fortunately, gardeners are generally smart and caring people, and their values are changing. They are more interested in sustainable landscapes, and they want more economical landscapes and gardens that need less water, time, energy, and money. And of course that means using plants and methods that are adapted to Colorado conditions.

We live in a semi-arid region that receives about 12-20″ of moisture a year. To have a drought, we only need to miss a few spring snows or rains. If rainfall is below average, or if we have high winds, or if temperatures are higher, conventional landscapes will require more water. And it is obvious that as our human population rises, water is becoming more scarce and more valuable. In 2005 the Colorado Legislature passed the Colorado Water for the 21st Century Act, and a 2005 Memorandum of Understanding by 32 metro mayors in Denver outlined their commitment to wise use of water in their communities. And Boulder put its water budgeting program into effect in January 2007. My point is that pressure is coming from many directions to conserve water, and that means it is time to learn to design and to make gardens and landscapes that use less water. It is time for xeriscape to become a mainstream method of landscaping in Colorado.

Since “xeriscape” can mean differing irrigation rates, I am going to use this word to mean a landscape that requires half the irrigation of a bluegrass lawn that is watered conventionally (which is about 25-30″ of water per season), so a xeriscape would need 12-15″ of irrigation per season, or less. I think this is a very generous definition, because I know of some good xeriscapes that receive only 5-8″ of irrigation per season. Most of the demonstration gardens at our nursery, Harlequin’s Gardens, have been watered 5 time a year, or less. But cutting the water use in half is a good goal. Another way of expressing this is to say that a xeriscape should be watered no more than once a week, deeply, increased to twice a week in July. This applies after the plants have been established for 6-12 months. 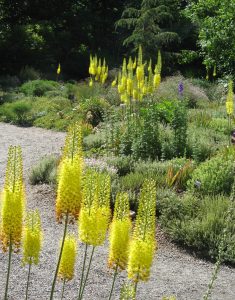 Xeriscape does limit water use but does not dictate any style. A xeriscape garden can be formal, naturalistic, or highly personalized. It can be mostly ground covers, mostly shrubs, mostly evergreen buns or mostly grasses. It can be mulched with wood chips, rock chips or ground covers.

It is common for people to think of xeriscape as a limitation, but there are opportunities with xeriscape that you don’t get with conventional landscaping. For example, people say “A lot of plants can’t be grown dry, so you must have a smaller plant palette to work with.” Certainly, there are plants you can’t grow in a xeriscape, but there are hundreds of great xeriscape plants that actually won’t survive with 30″ or more annual rainfall. Many of our Colorado native plants won’t survive moderate irrigation. Big Sage and Apache Plume will rot or look terrible if watered the same as Kentucky Bluegrass, and even “industrial strength” plants like Snow in Summer, Basket of Gold, and most yarrows will grow sloppy and/or develop fungus problems with moderate watering.

Most maintenance or landscaping professionals probably know that more plants die from over-watering than from under-watering. But it is common for gardeners to think that if a little water is good, a lot of water is better. This is untrue because plants need oxygen just as animals do, and when the soil is saturated with water, the oxygen is driven out. Without oxygen, the plants can’t metabolize properly, and the roots can’t grow.

SO HERE ARE THE OPPORTUNITIES WITH XERISCAPE:

In the last section I discussed the opportunities with xeriscape that you don’t get with conventional landscaping. Now I am going to share some of the tricks that can improve the outcome of a xeriscape garden. The first seven tricks are what I call “Water Equivalencies”. Even plants that grow where it’s hot and dry will thrive better, and often look better or flower better with some extra moisture, and these tricks will give them extra moisture without increasing irrigation.

HERE ARE A FEW OTHER TRICKS FOR XERISCAPES

There are some potential drawbacks to xeriscape which should be admitted, but there are ways to reduce their impacts. In a xeriscape there are certain plants you won’t be able to grow because they require more moisture. If you must have them, select a small, high visibility area in a protected location like on the north or east side of the house or other structure, and group your high-water plants there, and give them more water. This is still xeriscape and water wise. Or plant other plants that are similar-looking but use little water. For example: instead of hostas, use Lady’s Mantle or Bergenia; instead of ferns use Sweet Cecily or yarrows; instead of Hybrid Tea roses, use heirloom Shrub Roses on their own roots; instead of New England Asters use western native asters like Smooth Aster (A. laevis).

Another potential disadvantage to xeriscape is that plants that are watered sparingly won’t fill in as fast as plants that are given ample water. To reduce the impact, water amply (but not excessively) the first year to get faster fill-in, then reduce the watering the following year, and mulch to cover bare areas. Also, low-water annuals can be planted to fill in the gaps for a year or two.

Xeriscapes may bloom less than landscapes given ample water. However, there are some very long-blooming plants that thrive in low-water gardens – Chocolate Flower, Gaillardia, Catmint, Navajo Tea, California Poppies, Penstemon rostriflorus, hardy Geranium (Cranesbill) varieties, Engelman Daisy, Red Birds in a Tree, Larkspur, Standing Cypress (Ipomopsis rubra), Mongolian Gold Bush Clematis, Bear Claw Hellebore, and more. Other strategies to increase blooms in a Xeriscape include watering more during the blooming season to get more flowers, then cutting back after blooming, or planting self-sowing xeric annuals to get masses of color for 6-8 week periods. And you can plant large flowering shrubs and tough roses for big splashes of color. But remember – fewer flowers will not be noticed in a garden that is designed for sculptural forms, textures, foliage colors, variety of bloom times, for wildlife or for peaceful and meditative qualities.

Another disadvantage is that xeriscapes can look burned out and scruffy in July and August. In nature in Colorado, this is normal and not a problem if the plants can reproduce and/or come back strong the next year. But most homeowners and neighbors don’t like scruffy gardens. So, what is the antidote? In early July, do a thorough maintenance of dead heading, weeding and cleanup, followed by the longest, deepest watering of the year. This will give the garden a pick-up, new growth will be supported, and blooming will be encouraged for the summer and fall bloomers. 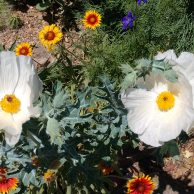 In Colorado we are looking for our own genuine landscape style. Traditionally, American gardens have been influenced by the English and Japanese styles, but both are more successful where there is ample moisture and temperatures are not too severe, like on the east and west coasts. Here in Colorado, we must discover a more appropriate style, using plants that are water-wise and cold hardy, like western natives and plants from similar regions around the world. And we need to apply methods that are adapted to Colorado conditions.

Beyond these guidelines, follow your own muse. Those of us who have been the leaders of the xeriscape movement for the past 30+ years will be looking to you for the innovations and solutions in the next 25 years of Colorado regional design. No magazine article is as powerful as the examples of our (your) own gardens in showing others that resourceful, ecological and water wise gardens can be beautiful and wonderful.

Harlequin’s Gardens recommends and sells some excellent books on Xeriscaping and water-wise plants: 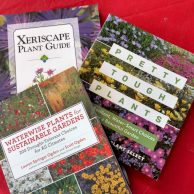